The superb vision of theatre director Sarah Jane Scaife to stage an Irish language version of a Samuel Beckett play at an outdoor location at the back of Inis Oirr is reflected in two nominations for ‘Laethanta Sona’ at the Irish Times Irish Theatre Awards next month.

Sarah Jane used a month long residency at Áras Éanna,after more than a year of lockdowns and restrictions, to fuse her passion for both the works of Beckett and the smallest of the Aran Islands at a stunning location overlooking the Atlantic Ocean.

The Company SJ and Abbey Theatre production, in association with the Galway International Arts Festival, has resulted in a Best Actress nomination for Bríd Ní Neachtain and a Best Set nomination for Ger Clancy.

Sarah Jane was the first artist to stay in our studio following the lifting of restrictions early last summer and set about working on an Irish language version of ‘Happy Days’ which ran for a week on the back of the island.

Among the attendees in late August and early September 2021 was the President of Ireland, Michael D. Higgins, and his wife Sabina.

Everyone who attended was particularly blown away by the performance of Brid Ní Neachtain in the role of Winnie, with Judy Murphy (Connacht Tribune) describing it as “the likes of which this reviewer has never seen”.

The were also taken aback by the set, constructed by local men from the island, and the quality of the sound at a challenging location overlooking Inis Meáin.

Translated by Micheal O Chongaile from Connemara, the show came about because Scaife had time to work with the actors and the outdoor set designers during a four week residency here at Áras Éanna.

Sarah Jane has been a regular visitor to Inis Oirr for decades and takes inspiration from the scenery, people, and culture of the island.

The winners of the Irish Theatre Awards, which cover a 24 month period because of the pandemic, will be announced at a ceremony at the Irish Museum of Modern Arts, Kilmainham, Dublin, on June 12. 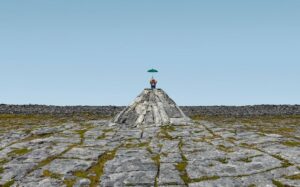 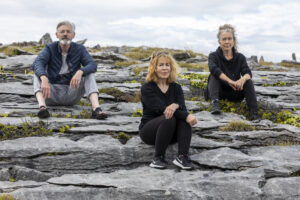