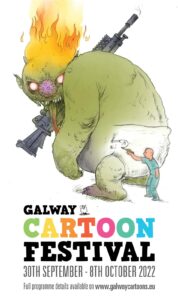 For the third year in a row, the cartoonists are coming back to Inis Oirr.

Once again, Aras Eanna has partnered up with the Galway Cartoon Festival to host an exhibition of cartoons in the Irish language in our gallery.

The first ever visit by the festival to our Gaeltacht island was hugely impacted by Covid-19, as the cartoonists had to leave during a time of restrictions, but the annual trip out to the island has become a firm favourite with cartoonists from all across Ireland who come to Galway for this annual festival.

And Áras Éanna is delighted to host ‘Tarraig É I nGaeilge’ (‘Draw it in Irish’) in our gallery for the third consecutive year next week.

The exhibition will be officially launched in Áras Éanna at 5:30 p.m. on Tuesday, October 4, and will continue until Saturday, October 9.

Everyone on the island is invited to the launch in our gallery on Tuesday evening, an event which will be attended by cartoonists from all over Ireland and will include “live” drawing before a trip to Tigh Ned.

The cartoonists are planning a number of events during a short stay on the island and ‘Tarraing É i nGaeilge’ is just one of three exhibitions of cartoons at Áras Éanna.

Former Galway City Arts Officer, James C. Harrold, will join veteran cartoonist Tom Mathews to launch the festival on Inis Oirr on Tuesday evening. The event will also feature Draw On The Wall, “live” drawing by visiting artists, with music down in Tigh Ned after the event.

The exhibition will present a wide range of styles and a variety of content from cartoonists across Ireland, and even overseas, to the public. It features work by internationally published artists, including Mark Wickham, Tom Mathews, Graeme Keyes, Aongus Collins, and Mike McCarthy.

In addition, Aongus Collins, or Aongus Ó Coileáin (‘Scratch’), has just spent three weeks in Áras Éanna as an artist in residence, drawing topical cartoons ‘as Gaeilge’ while taking inpsiration from our beautiful island.

His residency here on Inis Oirr is an extension of the wonderful partnership between Galway Cartoon Festival and Áras Éanna over the past three years.

The title of the show is ‘Still Crazy After All These Years’, a celebration of the 70th birthday of this regular visitor to Inis Oírr, who many believe to be the funniest cartoonist in Ireland.

Many of Tom’s cartoons in the exhibition have featured in the likes of Hot Press magazine, The Phoenix, The Irish Times, and The Sunday Independent over the years.

Our gallery will also host ‘Re-Joyce’, a visual celebration of James Joyce which will feature the work of artists from all over Ireland.

So, if you are anywhere near Inis Oirr, join us on the magical island next week!