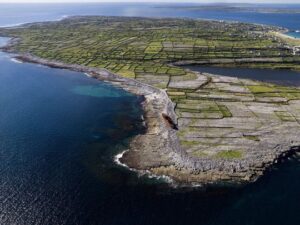 It took her a lot longer than planned to get here, but the timing could not have been better for Sandra Heemskerk from Holland as she enjoyed a one week holiday on Inis Oirr in splendid sunshine last week.

Sandra was the winner of the first ever ‘Éalú Draíochta’ fundraising draw run by Áras Éanna between May and July of last year and had to delay her trip to the Aran Islands by 12 months due to the coronavirus restrictions in both Ireland and Holland last year.

What she hadn’t planned when she won the competition is that she’d be seven and a half months pregnant with her first child by the time she made it to the island.

She came to Inis Oirr with her partner, Chaim Dijkstra and parents Janneke and Dirk, and enjoyed trips around the island, treatments, and even a day out on Inis Meáin during their stay.

“I am so happy that we finally made it to Inis Oirr,” she says during lunch in Tigh Ned. “September is such a lovely time to be here and we have had a wonderful week. It took us a whole year to get here. First there was Covid and now  there’s a baby on the way!”

An artist herself, Sandra visited Áras Éanna while on a trip to visit a friend who was completing a post-graduate course at the University of Galway a few years ago.

“My friend was doing an exchange in Galway at the time,” she says. “We just came out for a day to visit the Aran Islands. We thought we would visit Inis Meáin, but we stayed on the boat at the last minute and got off at Inis Oirr instead.

“I noticed there was an arts centre here so I thought I might as well come up and have a look, given that I am an artist myself. I loved the building. When I went back home to Holland, I began to check out the Aras Eanna website now and then, and that’s how I found out about the competition.”

After Sandra was announced as the winner of the ‘Éalú Draíochta’ competition on a glorious sunny afternoon in July of last year, she almost never found out about the prize. The email we sent her landed in her spam mail and it was almost a miracle that she just happened to check her spam that Sunday evening.

“I thought your email was a joke at first. You get these emails about winning a prize and you don’t believe them! Your email actually landed in my spam, but thankfully by complete chance I checked out my spam that weekend!”

The prize of a self-catering holiday included a host of extras, such as free pampering at Aran Seaweed Baths and Spa and a trip around the island on a horse and cart, which were generously donated by local businesses here on Inis Oirr.

“It has been such a lovely, relaxing holiday here on Inis Oirr,” says Sandra. “We have been touring the island and enjoyed wonderful massages and seaweed baths. We checked out the amazing musicians in the pubs. And we also sent to Inis Meáin for a day.It’s been so good. The people are so friendly and the environment is wonderful.

Keep an eye on the Áras Éanna website and social media accounts for details of another competition to win a holiday on the island in 2023.