A chance encounter with an Irish artist with Finnish roots at the opening of an art exhibition in Co Mayo in 2018 sowed the seeds for Jane Hughes and Tapani Hyppia to make the long trek from Helsinki, Finland, to enjoy a month long residency at Áras Éanna this summer.

Selma Makela told Jane that Áras Éanna was “a brilliant place that hardly anybody knows about” and now Jane is torn between sharing the story of her delightful stay on Inis Oirr and keeping it a secret from other artists!

“That’s the problem!” jokes Jane. “We don’t want your residencies to become too popular, because we want to come back here again!”

Having two separate spacious studios to work in during their four week stay was a huge bonus for the visual artists who delighted in the landscape, scenery, stone walls, lighting and seaweed they found around the island.

“I just looked Áras Éanna up after meeting Selma at the Custom House Studios in Westport and I sent in an application for a residency,” says Jane. “I said to Tapani that they might be able to give us two studios if we were lucky. We were thrilled that we could come and that there was so much space available to us.”

Tapani admits that he knew little about the Aran Islands, apart from the 1934 Robert Flaherty ‘Man of Aran’ film, before his arrival on Inis Oirr last month.

“It is very romantic. I thought the film showed what the west side of the island is like. I thought we would wrap up in our wellies and rain gear and get out to the back of the island, into the winds and the storms. It didn’t turn out quite like that in summer time. We got the stuff I saw in the film, but we also got all these friendly people and white sandy beaches. It’s been wonderful. It’s a very picturesque place, kind of like a seaside resort,” he says.

“The landscape is unbelievable. The stone walls. Going out to the cliffs on the west side, and having a 180 degree view across the horizon, and staring out at the waves and the space. It really goes through your mind. It is inspiring me for future projects.”

Jane says it was great that they had separate studios to work in, while sharing the same apartment. Her work space looked out on Inis Meáin and she admits that the temptation to get out and explore the island, rather than work in the studio, took over some days.

“My studio makes me just go ‘Wow’!” she exclaims. “It can be distracting because it is so beautiful. You keep thinking ‘I can’t be inside, I want to get out there!’ I need to be outside! I think coming from Finland, where it is so dark and cold for eight or nine months of the year, you feel a need to get everything you can from the outside environment here. I felt that kind of draw. Also, from the landscape, it almost penetrates into the room.” 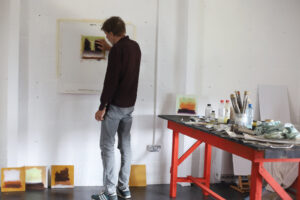 Tapani was struck by how the light keeps changing on Inis Oirr. He says the colours he discovered will inspire him for many months to come back in Helsinki. He also made the most of his time on Inis Oirr by getting out to explore.

“While I was here, I also had an exhibition in Westport. It turned out to be super nice! We took a couple of day trips. We went to Westport for the opening of the exhibition and we did a trip to Clare to check out the Ailwee Caves and the Cliffs of Moher. The ferry was delayed so they let us hop onto a cliffs tour for free. The people were super friendly,” says Tapani.

Tapani has been painting small pieces which he will turn into bigger works of art when he gets home to Finland.

“I have materials here that I will work on when I get home. After an exhibition, you kind of need to start all over again. It’s wonderful if you have a place like this to go to for inspiration. You see a different kind of light here on Inis Oirr,” he says.

Tapani was inspired by the stone walls which are found all around the island, while Jane feels she was recapturing some of the magic of her childhood.

“Although I grew up in Co Meath, my dad’s family is from Mayo and Galway. I was always struck by the stone walls in this part of Ireland. I also did a week in art college on Inis Mor, we did a workshop there. I still have fond memories of those nice purple skies on the islands,” she says.

Both of them are keen to return to Áras Éanna and Inis Oirr.

Although they are afraid that the word is getting out that it’s such a superb place for artists to take time out on the extreme west coast of Ireland.

A joyous re-awakening on Inis Oirr

Acrobatics for music in the pub

Happy days during a residency on Inis Oirr