For a man who has sampled the joys of indigenous cultures all across the world, visual artist Michael Mulcahy always has a special place in his heart for Inis Oirr.

When the building which houses Aras Eanna was just a disused weaving factory, Mulcahy became the first artist ever to stage an exhibition here after spending an entire winter on the island.

The current President of Ireland, Michael D. Higgins, was among those who encouraged Mick to use the factory building to show his work to the people of the island. Mick counts the Presdent of Ireland among his personal friends.

It was because of the success of Mick’s exhibition that the seeds were sown for the mad plan to locate an arts centre on this tiny island with a population of just 300 people.

It seemed fitting that Mick Mulcahy returned to Inis Oirr for a four week residency at the arts centre in February of this year and that his current exhibition ‘Nowhere to Hide at Sea’ will coincide with his 70th birthday party here on the island.

When Mick returned to Inis Oirr in July 2021, after a long absence from the island, he was thrilled to discover that there was an artist in residence programme in place at Áras Éanna.

“It is paradise for me here,” says Mulcahy. “For inspiration, all you have to do is look out the window. The light in these studios. Even in the darkest day of winter, there is brilliant light coming from three sources. As for the accommodation in the studio, you wouldn’t get it in the Ritz. It’s lovely.

“I might go to bed at 9 o’clock in the evening and get up at 3 o’clock in the morning. Especially in the spring or the summer. To see from the darkness to the dawn. That silence out there and then, suddenly, the little birds start singing. And the rain is fresh. And there is nobody around. I don’t have a mobile phone. I don’t listen to the radio. I just come in here and the painting paints itself.”

Mick loves painting big paintings and he really made the most of his time here in February and March of this year. The results of his work on Inis Oirr can be seen in the ‘Nowhere to Hide at Sea’ exhibition, which runs until July 31.

The exhibition coincides with his 70th birthday which he will be delighted to celebrate with the people of Inis Oirr.

“I have been 50 years painting now. People ask me do I ever plan. And I say no, that I trust my instinct. I feed on the energy of the natural environment. I love the energy of the sea. I’m a good sailor. The sea can be so mild one day and then so rough the next day. I love living close to nature, going swimming or going sailing. I have respect for the sea,” he says.

“I don’t look at television. I don’t have a radio here. I like to go down to the pub and hear the music down there. I am firing on overdrive when I come out here. And then there’s the craic down the pubs. I don’t speak Irish. I used to be fluent. It’s in the back of the head, but it’s slowly coming back. They love tomfoolery here on Inis Oirr. They love telling stories and exaggerating, topping them up with lies!” 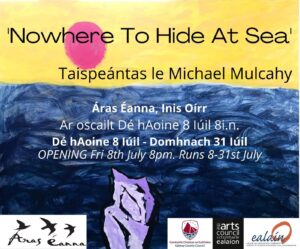 Mulcahy understands why writers of the calibre of JM Synge and Antoni Artaud were inspired by the people of the Aran Islands.

His own, huge vibrant paintings, currently on display in the Áras Éanna gallery, also took inspiration from his most recent four week residency on Inis Oirr.

“It’s always good fun to come back here,” he says. “I had great fun doing a mural outside the island’s shop last summer, of cannibals running amok at the back of the island, and getting feedback from the locals. It’s brilliant that there is an arts centre here now and that artists get to engage with the people of the island.”

Mick jokes that he is currently looking to rent out a shed here on Inis Oirr. He has had exhibitions as far afield as Africa, India, South Korea, and Australia, but one senses he truly feels at home on the wild island of Inis Oirr.