One of Ireland’s most famous expressionist artists, Mick Mulcahy, will unveil a retrospective of his work – and new paintings from a recent residency on Inis Oirr – in the Áras Éanna art gallery from Friday July 8, to Sunday, July 31.

Mulcahy was the first artist ever to hold an exhibition in the building which now hosts the most westerly arts centre in Europe.
After spending a winter on Inis Oirr in the late 1980s, he was inspired to showcase his work in the disused weaving factory which now houses Áras Éanna.

Mick returned to Inis Oirr when Áras Éanna celebrated its 21st birthday in July 2021 and, as a result, was invited to spend a month in residence at our studio.

Mulcahy’s latest exhibition, entitled Nowhere to Hide at Sea, opens at 8pm on July 8 and runs until July 31. Mick is also celebrating his 70th birthday this year.

“Maybe without Mick Mulcahy, there would be no arts centre here on Inis Oirr,” says Dara McGee, Artistic Director of Áras Éanna.

“Over 25 years ago, Mick rented out this building, which was a disused weaving factory, and used it as a studio. Out of that came the idea to locate an arts centre here. Mick wandered back to Inis Oirr again last summer, coinciding with our 21st birthday.

“We struck up a great bond between the arts centre and Mick which resulted in Mick spending a month here on a residency in February of this year, preparing work for this exhibition and for a retrospective that is on in Dublin later next month. We are delighted to have Mick here. He is such a flamboyant, colourful character and that comes out in his art works.”

* The Michael Mulcahy exhibition opens at Áras Éanna, Inis Oirr, on Friday, July 8, at 8pm and runs until Sunday, July 31. 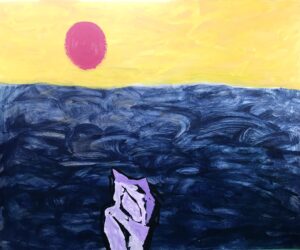 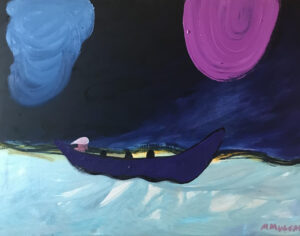