Clare came to the smallest of the Aran Islands thanks to a partnership with Ealaín na Gaeltachta and says she was “absolutely over the moon” to get the chance to spend six weeks on Inis Oirr.

Originally from Cork, Clare is a visual artist who has been exploring the landscape, imagination, and perception of Connemara since moving to Carna in South Connemara a decade ago.

Her work has been shown in solo shows and in several group exhibitions nationwide at venues including the Crawford Municipal Art Gallery, Cork, the Butler Gallery, Kilkenny, the Model in Sligo, the Ashford Gallery, Royal Hibernian Academy, Dublin, and Pallas Projects, Dublin.

So she was not a million miles from home during her stay on the island, but she still found the landscape and atmosphere very different from Carna. 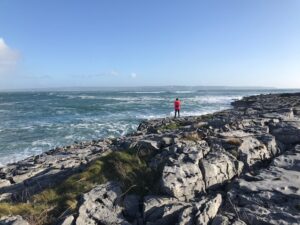 “It was fantastic, really,” she says. “I really wanted to come here. I am not afraid of harsh weather, but we had four storms while I was here. I have endured a lot of Connemara winters. Absolutely, I am inspired by the landscape, which is my main reason for living in Connemara.”

She brought her pet dog Amber to the island and was inspired by the landscape, the stone walls, and the views of Connemara, Clare, and the wild Atlantic Ocean on long walks most days.

“It has impacted on my imagination. It’s not a million miles away from home. I can basically see home from here. Curiously, one of the first things I wanted to do when I got here was look across the bay and see the mountains near my home,” she says.

“The landscape is so different. The rock is different. There is granite in Carna and limestone here. And the walls. I know we have stone walls in Connemara, but they are very different here. It’s a completely unique place.” 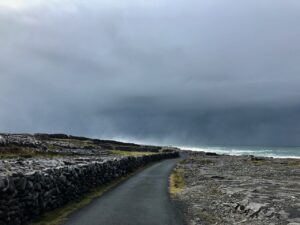 Clare would have been delighted by an eight week residency, as the days were beginning to lengthen when she left the island on Saturday. The days were very short when she began her residency at the end of January.

She got to see an Inis Oirr which few tourists ever get to see – quiet, battered by winter storms, and with almost no visitors around during the first couple of months of the year. “When I got here I wanted to explore the whole island. I walked over the whole island. But if I found myself out at the back of the island at 5 o’clock or half past 4 I’d just have to come straight home. If it was the summer, you could be heading out after your dinner and do a three or four hour walk in the evening,” she says.

During the coronavirus lockdowns, Clare loved exploring islands near her home on foot.

Getting away for six weeks has inspired her to explore the world more and to apply for more residencies away from home.

The care and attention which local people put into building the stone walls really struck her as she wandered the island’s back roads and narrow pathways with her camera. 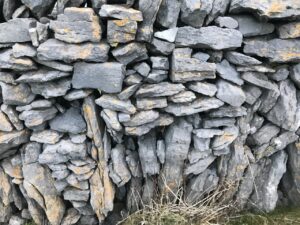 “It does give you a new perspective,” she says. “It’s a nice time to get away, because the summer in Connemara is so beautiful. I loved the exposed, elemental side of the island, with just the sea, the sky, and the rocks. The very first thing that made an impression on me at the end of January was how dark and how quiet the island was.

“I loved the sea rolling in from the west and the beauty of the noise of the waves.

The roar of the ocean. Whereas where I live in Carna, it is very sheltered.

We never get big waves in Carna!” 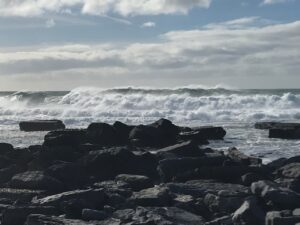 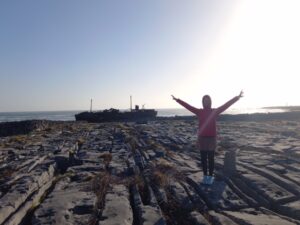