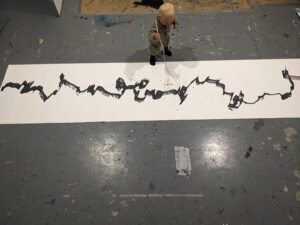 The opportunity to spend a month on a small island where Irish is very much a living language has been both a transformative and productive experience for circus artist Darragh McLoughlin.

As he returns to Berlin, where he is normally based, Darragh says that he will harbour fond memories from Inis Oirr after producing more than 600 works of art during his four week stay with us at Áras Éanna.

Darragh came to the island with his partner Sofia and one year old son Loki thanks to our partnership with the Irish Street Arts, Circus and Spectacle (ISACS) Network and put on an exhibition for the people of the island before returning to Germany.

“It’s been quite an experience. I imagine that’s what a lot of artists feel when they come here, that they are not just coming to a studio, but they are having an experience of a place,” he says.

“It’s the first time I have spent any significant amount of time in a Gaeltacht. As someone who left Ireland 16 years ago, and who only comes back for different projects, it has been a real experience to connect a little bit with where I come from and the history of these islands and the greater island of Ireland.

“I feel quite removed from that in my normal day-to-day life. So that’s been a great experience and it has brought up a lot of reflections about where I come from.”

He has loved hearing Irish being spoken on his rambles around Inis Oirr, while picking up everyday objects to use in the studio at Áras Éanna, every day.

“Learning Irish for me was a traumatic experience. It was in a school system and it was disconnected from what a language is used for, which is communicating with people. My experience of Irish was being dragged into learning lists and memorising different words, without actually making the essential connection of a language as a means to communicate with other people,” he says.

Before coming to the Aran Islands, he had developed a playful show which involved balancing his body and circus movements in front of a TV screen, translating it into French, German, Spanish, and Italian.

Now he’s considering translating the show into Irish for the first time. He says that as a beautiful consequence of spending a month on Inis Oirr.

“For me this month, it’s been great to see Irish as not only another language, but another way of seeing the world,” he says. “And another way of creating metaphor with language, and which makes the idea of it being lost even more tragic and it makes me curious to translate my work into Irish and to wonder if a new meaning would appear that wasn’t there in any of the European languages.”

Darragh’s work on Inis Oirr involved collecting everyday objects around the island, balancing them on his body, and then using them to produce new sketches. It’s much different from his usual focus on writing shows for the stage or performance in Berlin.

On his last weekend on the island, he treated the people of Inis Oirr to a “live” demonstration of his work in the gallery at Áras Éanna. 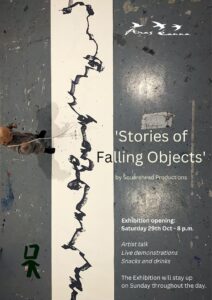 “I have been collecting different objects. Placing them on the back of my hand, and then balancing them. And then at the same time, I’m holding a pen on a piece of paper, and the movement created by the balancing is then transmitted accurately to the page,” he explains.

“There’s no such thing as stillness in balance. There’s an organic body cannot be still because we have the blood flowing through our veins. Our hearts are beating and our lungs are breathing. Balance isn’t about stillness but trying to relax into the chaos of the movement and to find the centre point, which is always moving.”

He used objects such as plants, ferns, sticks, and old rusty pipes to create between 600 and 700 drawings in the studio, with regular visits from Loki, who was very curious about what he was up to.

How did he enjoy bringing his young son to the island?

Sometimes it could be a bit tricky such as when Loki – who is learning to walk – would wander into the studio to find Darragh doing some precarious balancing act.

Darragh and Sofia agreed that they would always travel together for work when Loki came into the world and all three of them enjoyed their month on Inis Oirr.

“I think Loki liked it here. He’s coming into the world, manifesting as a human being still. He’s always very excited about his surroundings and the world. It was very nice to have donkeys and cows around, because he does not have a lot of contact with animals in Berlin,” he says.

“In Berlin, the few buildings next to me would have the population of this island. Berlin has the population of the Republic of Ireland in one city. It’s a whole different world. Moving to a new place is not new for me. I spend at least six months of the year not at home, travelling for work. But this is a unique place. I have some fond memories and it will be on my mind for a while.”

Darragh McLoughlin and his young family enjoyed a one month residency on Inis Oirr thanks to our partnership with the Irish Street Arts, Circus, and Spectacle (ISACS) Network. To find out more about the ISACS Network, Ireland’s leading support and advocacy organisation for development in the sector, please check out their website at https://isacs.ie/

This residency was supported by the Arts Council of Ireland. 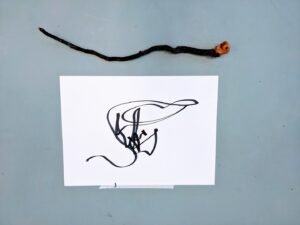 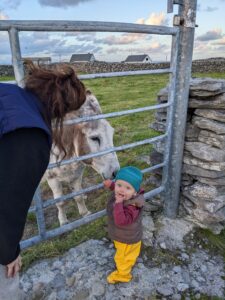