It was the kind of magic which seems to just happen on Inis Oirr.

On a cold Tuesday night in October, a musician approached two acrobats in Tigh Ned, the island’s famous music pub.

He had seen acrobatic performers Ali Stanger and Henrik Gard perform some sensational moves on the beach earlier in the day and wondered if they would put on a performance in the pub as a treat for a friend’s birthday.

Ali and Henrik, the founders of Cikada Circus, treated everyone in the pub to a sensational little show which has already achieved legendary status on the smallest of the Aran Islands.

“It was a funny moment,” says Henrik, who is originally from Sweden. “We met a guy in the pub who told us he was watching kids watching us on the beach. He was fascinated by our work. He put in a request that night for a birthday party. We agreed to do an exchange – acrobatics for music!”

Ali and Henrik have just spent the month of October enjoying a residency at Aras Eanna, thanks to the Irish Street Arts, Circus and Spectacle (ISACS) Network. Their residency was all the sweeter because it was postponed twice last year due to Covid19.

“There has been a massive sense of anticipation and excitement for us about coming to Inis Oirr, because we were originally supposed to come in April of last year. And then in October. We were disappointed when it had to be cancelled and we just knew that we were going to hold onto this residency,” says Ali.

Henrik had been to Inis Oirr before, to set up a tent for the ‘Fr Ted Festival’ in 2015. He was thrilled to get the chance to return for almost a month to work on new projects for next year.

“It’s really, really valuable to have an organisation like ISACS which is all about networking and a central hub to bring us opportunities and create connections, such as with Áras Éanna here. A partnership like that, to establish an annual thing to bring people over, from a relatively new and rapidly growing art form, like circus and street arts is super valuable,” says Henrik.

The couple normally divide their time between Belfast and Dublin, so the opportunity to spend more than three weeks on a windswept Gaeltacht island on the west coast really appealed to them. They have been inspired by the landscape and the people of Inis Oirr during their stay.

“When you come to a beautiful place like this everything just drops and it feels like we are switching off and getting totally involved in our work. It just happens, instead of forcing it to happen, in a place like this,” says Ali.

Henrik says they felt “relaxed and creative” during their time at Áras Éanna. They were able to use a studio with a stunning view of Inis Méain and the wild Atlantic during their stay, but they also did a lot of work at outdoor locations around the island.

“We are making a new show for next season, based on our work here. The goal was to collect ideas here. There was no pressure on us to meet deadlines. We also spent time working creatively together without a specific goal. It was just so amazing that ISACS gave us this opportunity to spend time at Áras Éanna,” he says.

Ali says that they would make a plan for each day the night before, as they had a little notice board up on the wall in their studio.

They discovered a bench at the island’s playground which became the focus for their next show. People passing the playground noticed them performing wondrous movements during their time on the island.

“One of the things we want to do is a site specific show which we can take to a town or city. So we have been working with this bench down in the playground. We wanted to make a new show outdoors. There are benches in every town and city in Ireland, so this was the perfect place to work on a show outdoors,” says Henrik.

Ali says they have enjoyed their time so much on Inis Oirr that they do not want to leave.

Henrik says that the pandemic has put greater value on outdoor performances and that there is a growing awareness of the wonders of street performance in Ireland. Most of Cikada Circus’ performances are at outdoor festivals around the country.

“In Ireland, street art is still very young compared to other countries. I think Covid may have accelerated that, by putting a greater value on outdoor performances. There is no need to buy a ticket. If the audience don’t like what you are doing out on the street, they can just walk away.”

As they reluctantly say goodbye to the island, expect to see the magic they created on a park bench on Inis Oirr at festivals around Ireland in 2022. 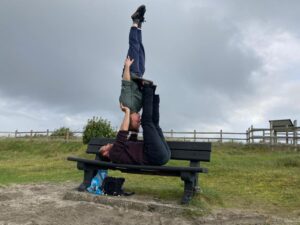 Find out more about Cikada Circus at http://cikadacircus.com/

Find out more about the ISACS Network at https://isacs.ie/