Visual artist Sian Costello admits that she had “a bit of a breakdown” the first day she arrived at Áras Éanna courtesy of a one month residency in partnership with the Royal Hibernian Academy (RHA) this summer.

Suddenly, after leaving her “normal” life in Limerick City behind, the young County Roscommon native (24) was excited by the prospect of having a full month to herself to work on her art on beautiful Inis Oirr.

She only had a few weeks to arrange her travel and time off work after being announced as the successful recipient of this year’s RHA Emerging Artist residency and found that any plans she had were upended by the beauty of the island.

“It’s been fabulous to have a whole month to dedicate to my practice. I couldn’t get over the stunning view and the setting when I first arrived here. It’s also quite distracting, because I wanted to watch the sunset over Inis Meáin from the studio every evening,” says Sian.

“It’s nearly like entering another world, allowing yourself to sit in your thoughts for a long time, which is something you don’t normally get a chance to do every day. You are always thinking of other things and other people. It has been a bit of a ‘selfish’ month, because it’s given me a chance to focus on my own ideas. But it’s been great to have this opportunity.”

Sian is normally based at Wickham Street Studios in Limerick City.

She works at cultural resource centre Ormston House, who were kind enough to give her four weeks off after she was announced as the successful applicant for the RHA Emerging Artist residency.

“I love my studio in Limerick, but it doesn’t have any natural light. That can be very hard to work in during the summer, when it can get quite hot. Looking out at the beautiful light outside the studio has been a thrilling experience here on Inis Oirr,” she says.

Sian comes from the very small village of Croghan outside Boyle, County Roscommon, so living on a quiet island for a month has not been a total shock for her.

The sense of wonder came in realising she had a full month to work on her own art without any distractions. Although she loved being on the Aran Islands at a time when there were plenty of tourists around and lively music sessions in the pub.

“Inis Oirr seems a lot more cosmopolitan to me than the small village I am from,” says Sian. “It hasn’t really dawned on me that I am on an island. I love being able to see Galway Bay, Doolin, the lights at night, Inis Meáin and Inis Mór. It makes you feel very connected, being able to see these places. Whereas the place I am from is very remote, Inis Oirr feels a lot more accessible than the tiny village I am from.

“It can feel daunting to arrive here on your own and have a full month ahead of you. It was a weird see-saw for me, between being really excited about being here and then thinking about all the things I wanted to make during my time here. There were times here when I felt quite isolated. I just hadn’t had a chance to immerse myself in my own thoughts for quite a long time. But I wanted to cut myself off and I had to put a ban on the phone after a while!”

She said it was “quite lovely” to just sit with her own thoughts and dedicate herself to her work, without having daily distractions such as meeting friends for coffee. The support she received from her employers in Limerick also gave her a huge boost before she made the trip out to Inis Oirr.

“This residency came at a really good time for me. Summer is a tough time in my studio, because it can be so hot and there is no natural light. You feel like you want to go places and meet people. Once I got here, I decided that I was just going to enjoy the light, the space, and the time,” she says.

“I felt like I have made huge leaps in my work that I wouldn’t have made if I wasn’t here. I think I’ve developed a different way of working than before I came here. It was wonderful to get into the mindset of just being here in this beautiful place, having a month to work here, without having to aim towards any specific targets or shows. I think I have become more confident in the work I have made.”

During her time in the studio, Sian made two large pieces on canvas based on horses she had seen on the island. She found inspiration from the peaceful presence of the horses, which reminded her of a horse beside the primary school in her home village in Co Roscommon.

She loved calling into the craft shops on the island, the woven belts made by locals, and exploring the clothing and symbolism of clothes on the Aran Islands.

“I found the whole place kind of ‘otherworldly’ in a way, in that there were so many quirks to the island. I love the horses here and how curious they are. I love the old cars going around as well. It’s like being in Cuba. There is no flashiness about anything,” she says.

“I would love to come back and show my work here on Inis Oirr. I am bursting with ideas now that I’m at the end of my time here. I think I have a feeling that I should have done more, but I’m also excited by ideas that I have from here going back to my studio in Limerick.” 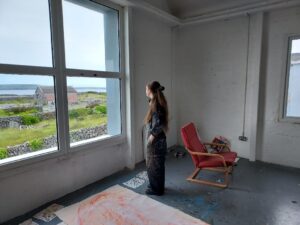 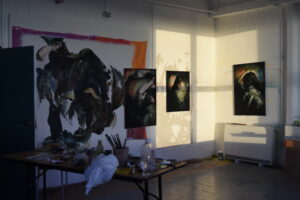