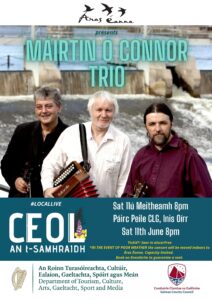 By Ciaran Tierney
One of the best-loved musicians ever to emerge from the West of Ireland, Máirtín O Connor, is headlining a special free outdoor show on Inis Oirr this Saturday, June 11 (8pm).
Accordion player Máirtín will be joined by Cathal Hayden (fiddle, banjo) and Kevin Doherty (guitars, vocals) for what promises to be the musical highlight of the summer on the Gaeltacht island.
Support comes from the cream of musicians on the island, including Michéal Ó hAlmhain, Clann Uí Domhnaill, and other local guests.
This event is supported by Galway County Council Arts Office and funded through the Department of Tourism, Culture, Arts, Gaeltacht, Sport and Media Local Live Performance Scheme.
Having played on the first Riverdance tour, Máirtín has played with De Dannan, Midnight Well, and Skylark during a fantastic career and is considered one of the best accordion players in Ireland.
Mairtin, Cathal, and Seamie O’Dowd have been playing together as a three piece regularly since 2001, after collaborating on the ‘Road West’ and ‘Rain of Light’ albums.
Unfortunately, due to personal circumstances, O’Dowd is unable to travel from Sligo for this concert on Inis Oirr. But he is being replaced by Doherty, from Donegal, who is well-known as a solo artist and has collaborated for many years with Hayden as a member of Four Men and a Dog.
Martin released his first album, ‘The Connachtman’s Rambles’, in 1979, on a label founded by trad impresario and his good friend, Donal Lunny. ‘Perpetual Motion’ followed in 1990, showcasing his mastery of the accordion.
He played on The Waterboys’ ‘Fisherman’s Blues’ album, which was recorded in An Spidéal; and he has toured with Christy Moore and the aforementioned Lunny, as well as working with international figures of the calibre of Mark Knopfler, Elvis Costello and Rod Stewart.
Hayden, one of Ireland’s leading fiddlers and banjo players, was a founding member of Four Men and A Dog.
Thanks to Coiste an Páirc Inis Oirr for use of the football pitch for this concert, which will be moved indoors to the theatre at Áras Éanna in the event of inclement weather.
TICKETS: Free
***IN THE EVENT OF POOR WEATHER: The concert will be moved indoors to the theatre at Áras Éanna. Capacity is limited. Please book in advance to guarantee a seat***.
https://www.eventbrite.ie/e/mairtin-o-connor-trio-live-on-gaa-pitch-inis-oirr-tickets-359432962667