The local composer who has put together the stunning soundtrack to go with our current ‘Old Aran in Colour’ exhibition has a special connection to one of the photographs which are currently delighting visitors to Inis Oirr.

MacDara O Conaola’s own grandfather, granduncle, and their parents were captured in a photograph by author J.M. Synge on the beach here on Inis Oirr when he visited the island in 1905.

The stunning image is one of 20 which have captured the imagination of hundreds of visitors to the island in recent weeks and visitors are equally enraptured by the soundtrack produced by MacDara which accompanies the music between 11am and 4pm each day.

The photos are located outside the Aras Eanna building, at a site which commands stunning views of Inis Meáin, Connemara, the Burren, and Galway Bay, ensuring that people get to see the photos at all hours of the day.

MacDara was invited by NUI Galway academic John Breslin to compose music for the exhibition and it now plays on a loop, really adding to the ambience for those who come up to Áras Éanna to check out the colourised photos.

“John and I had been in contact with each other during the pandemic,” says MacDara. “I said to him that it would be nice to collaboarte on a project to do with the Aran Islands, becuase there is a magic attached to the islands and people have been enchanted by the islands for many years.

“A short time later, John sent me an email to say that he wanted a soundtrack to go with an exhibition he was putting together with colourised old photographs of the Aran Islands and also suggesting that I might be able to help them with the colours.”

MacDara sought the assistance of older people on the islands as academics John Breslin and Sarah-Anne Buckley set about colourising the old black and white images from the islands.

“I had my own thoughts about the colours of the people’s clothes and I also asked a lot of questions of people here on Inis Oirr to make sure that that the correct colours were on the photographs.

“I had always been interested in the photo Synge took of my own family in 1905, the photo he took on the beach here on Inis Oirr.”

MacDara has always had a keen interest in the heritage, history, and especially the people, of Inis Oirr.

Although the striking photo of his grandfather’s family had been in the O Conaola family home for decades, it was only 20 years ago that Islander Sean Mhaidhc Searraigh put names on the four people standing on the beach.

MacDara has put 11 songs together on the soundtrack which plays on a loop outside Áras Éanna every day and it really adds to the ambience for visitors who want to check out the stunning images from the Aran Islands.

This exhibition is co-funded by the Árainn Fund at NUI Galway and Áras Éanna Ionad Ealaine. It runs until the end of September. 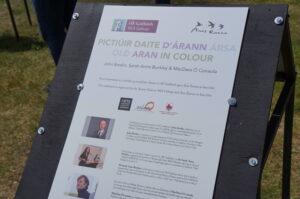