In a first for an Irish language production, Brid Ní Neachtain won the Best Actress award for her role as Winnie in ‘Laethanta Sona’ here in Inis Oirr at the 23rd Irish Times Theatre Awards in Dublin last night.

The remarkable vision of theatre producer Sarah Jane Scaife to stage an Irish language production of ‘Happy Days’ by Samuel Beckett outdoors at such a challenging location was recognised in Brid’s gong for her brilliant performance on the island last year.

Bríd was present at the glittering awards ceremony at the Irish Museum of Modern Art in Dublin last night to collect her thoroughly deserved award.

It is the first time ever the award has gone to an actress in an Irish language production.

‘Laethanta Sona’ was performed at a specially constructed mound at Craig an Staic, a quiet location overlooking the Atlantic Ocean and Inis Meáin at the back of Inis Oirr.

The first ever Irish language production of ‘Happy Days’ was performed here on the island last August and September as part of the Galway International Arts Festival.

Buried up to her waist and then her neck, Brid produced a remarkable and physically challenging performance as Winnie which received standing ovations here on Inis Oirr.

Sarah Jane used a month long residency at Áras Éanna earlier last summer to bring her passion for both the works of Beckett and the smallest of the Aran Islands together.

Among those who attended the performances at Craig an Staic was the President of Ireland, Michael D. Higgins, his wife Sabina, and daughter Alice Mary.

Judy Murphy (Connacht Tribune) described Brid’s performance as Winnie as “the likes of which this reviewer has never seen”.

Translated by Micheal O Chongaile from Connemara, the show came about because Scaife had time to work with the actors and the outdoor set designers during a four week residency here at Áras Éanna. 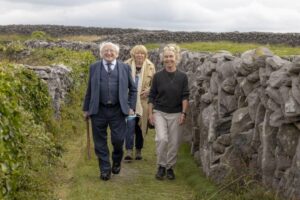 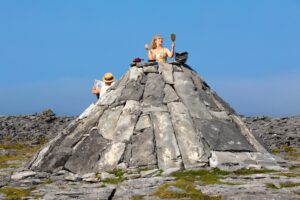