A musical and cultural treat is in store at Áras Éanna this Friday evening (November 18) when Aboriginal artist Jessie Lloyd brings the indigenous songs of Australia to our theatre (8pm).

Jessie is a vocalist, guitarist, bassist, and ukulele player from the tropics of North Queensland, a cultural practitioner of indigenous music who is dedicated to the continuation of song traditions in her native Australia.

She has been invited to Galway for a new musical festival, Songs for An Open Road, and is thrilled to make the short journey across the sea to sample the indigenous culture on our Irish speaking island this weekend.

Jessie’s profoundly moving Mission Songs Project reveals the daily life of Aboriginal people on the missions, settlements and native reserves during the colonisation of Australia. It is a musical time travel of original compositions from the residents over the generations.

She founded Mission Songs Project seven years ago to explore the human reality of the ‘missions era’ where Aboriginal people were forcibly removed from their homelands and onto the missions. In a time of great distress, these truthful songs are surprisingly filled with optimism and hope, revealing a forgotten story on an unexplored corner of Australian history.

Jessie has travelled all around Australia to talk to communities and elders about the music and life of the old days. She has collected between 40 and 50 ‘mission songs’ about life on the settlements, reserves, and native camps, where Aboriginal and Torres Strait islander people were forcibly removed to during colonisation.

Her live shows take audiences on a moving musical journey into the depth and diversity of Australia’s cultural identity.

This week Jessie has brought her message and music to various communities in Galway, including the Galway Traveller Movement, the Galway Simon Community Choir, and to schools in both the city and county.

Songs from an Open Road is a new festival of music, talks and film that explores the sources and examines the influence of what is often referred to as “global music”, such as the migration of Irish and Scottish music to North America as a result of the Great Famine and Highland Clearances. 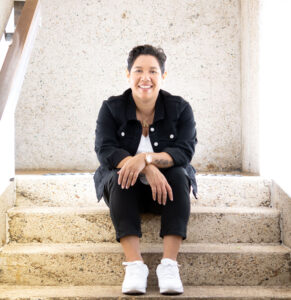 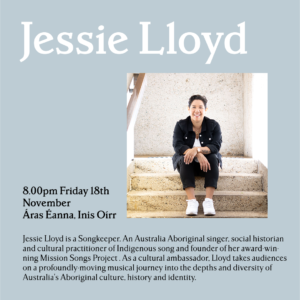