Aras Eanna Ionad Ealaine, Inis Oirr, is delighted to announce that acclaimed Japanese contemporary dancer and choreographer Akiko Kitamura is working on a new show inspired by a visit to the Aran Islands, Galway, and Connemara in 2019.

Inspired by the rugged landscape and traditions of the West of Ireland, Akiko is working with Galway dancers Magdalena Hylak, Stephanie Dufresne and Mintesot Walde on a performance called ‘Echoes of Calling – Encounter’.

This performance in association with Galway Dance Project is part of Galway’s European Capital of Culture 2020 programme, which has been extended because of the pandemic.

Originally planned to take place in person at Aras Eanna this month, it is now expected to go “live” online on Friday, April 23.

Akiko is currently rehearsing with the three Galway dancers via Zoom workshops on a project which examines ancient spiritual practices and rituals, exploring the relationship between prayer, shamanism, animism, and dance from a contemporary perspective.

Initially intended as a residency, development and performance of work at Áras Éanna and Galway City, the project has been re-imagined for Galway 2020’s programme, in response to ongoing restrictions relating to Covid-19 pandemic.

‘Echoes of Calling’ premiered in Tokyo in January 2021, with an ensemble of Japanese dancers and Irish sean-nós singers Dominic Mac Giolla Bhríde and Diane Cannon.

Akiko was inspired to explore the ‘sean nós’ tradition after being amazed by a concert by Dominic at Aras Eanna during her time on Inis Oirr in 2019.

The outcome will be an inspirational meeting between East and West, connecting the most westerly arts centre in Europe to the eastern metropolis of greater Tokyo in Japan.

We will have more news about the screening at the end of April in the coming weeks.

* ‘Echoes of Calling – Encounter’ is part of Galway 2020 European Capital of Culture, in partnership with EU Japan Fest. 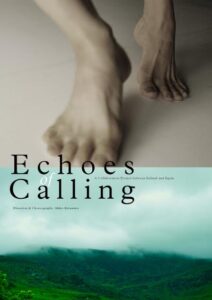