A concert with a difference takes place at Aras Eanna, Inis Oirr, this Thursday night (August 25, 8.30pm) when leading exponents of the traditional harp from Ireland and Ukraine, Paul Dooley and Kseniya Rusnak, come together to raise funds for the people of Ukraine.

Paul and Kseniya began to collaborate together after Kseniya moved to Lisdoonvarna, Co Clare, in the wake of the Russian invasion of her country earlier this year and we are thrilled to welcome them to Áras Éanna this week.

All money raised on Thursday night will go towards Ireland for Ukraine, a charity set up by a coalition of Irish media organisations to support the people of war-torn Ukraine: https://irelandforukraine.ie/

The Irish public are renowned for their generosity in times of great need. While there is no cover charge on Thursday night, there will be a suggested donation of €10 on the door for this celebration of the traditional harp in our two countries.

“All donations will go into a fund managed by the Community Foundation for Ireland. From this fund, 50% will be allocated to our charity partners working on the ground in Ukraine,” explains a spokesman for Ireland for Ukraine.

“The remaining 50% will be allocated to charities and community groups working to support refugees from this crisis here in Ireland, on a grant basis.”

Paul Dooley is one of the leading exponents of the Irish harp in its historical form and style – playing a metal-strung harp with the fingernails. Playing mostly Irish dance music, he has performed worldwide as a soloist and with some of Ireland’s finest traditional musicians.

She is a founder member of the band Mosaic, an ideologist, and moderator of a number of charity art projects – ‘Music in every Heart: Children for Children’, ‘Winged Dreams’ for children with special needs. She is also curator of the ‘Constellation of Arts’ cultural project.

Kseniya began a musical collaboration with Paul shortly after arriving from Kyiv to live in Lisdoonvarna, Co. Clare earlier this year.

Their repertoire comprises an eclectic selection of traditional music from Ireland and Ukraine. Their first public performances have wowed audiences at the Willie Clancy week in July.

If you are on the island of Inis Oirr this week, please come along to enjoy top class traditional music and to support a worthy cause. 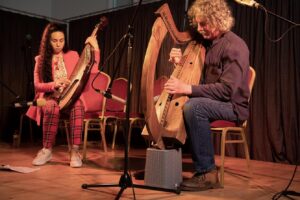