An exhibition which celebrates 40 years of visual artists in the Gaeltacht will take place at Áras Éanna in August.

Údarás na Gaeltachta and Ealaín na Gaeltachta will celebrate 40 of the Gaeltacht’s visual artists in a superb exhibition which will take place on Inis Oirr from August 5 to September 13.

It marks 40 years of support for visual artist in the Gaeltacht region.

The exhibition, curated by Úna Campbell and the team at An Gailearaí, Gaoth Dobhair, will launch at the Áras Éanna Ionad Ealaíne gallery on August 5.

It celebrates the breadth and diversity of work being made by artists who live and work in the Gaeltacht, featuring the work of several generations of artists.

Widespread access to the arts has always been a priority for both Údarás na Gaeltachta and Ealaín na Gaeltachta through the past four decades.

“As a Gaeltacht community, we are deeply indebted to our artists. Imagine a life without their vision, without their dreams,” says Rónán Mac Con Iomaire of Údarás na Gaeltachta.

Ealaín na Gaeltachta promotes the development of the contemporary and the traditional arts in the Gaeltacht and has been joint venture between Údarás na Gaeltachta and the Arts Council since 1997. 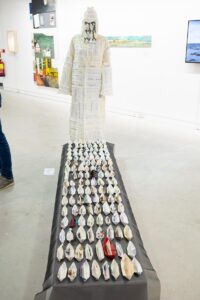