A dance movement artist who has been taking inspiration from the people and landscape of Inis Oirr for the past year is hosting a series of “drop in” lunchtime workshops with islanders next week to showcase her work.

Bernadette Divilly took huge inspiration from Inis Oirr when she enjoyed a two week residency with the Galway Dance Partnership and Galway County Council here last December. She has continued to engage with the people and the island since then, returning regularly throughout the past year.

“I had been wanting to come, if I am to be honest, for 20 years. I used that two weeks to walk around the island, to follow the signs ‘as Gaeilge’ and to listen very deeply to the place,” says Bernadette.

“It really inspired me to make an application to the Arts Council for a bursary award, to look at language, landscape, and body. I am taking inspiration from the landscape of the island. I am trying to understand what happens when there is a loss of a language through trauma, through emigration and migration, and what happens through that experience.”

Inspired by the writings of people like Manchán Magan, Inis Oirr native Dara O Conaola, and poet Nuala Ní Dhomhnaill, Bernadette has rediscovered the joy of the Irish language in 2022 as well as collaborating with island photographer Cormac Coyne to produce stunning images at sites throughout the island.

She loves the way in which our native language has survived on Inis Oirr despite centuries of colonisation and emigration and has been inspired by the people she has met during a series of return visits throughout the past year.

“I am translating in three different ways, by letting the landscape inform my body, getting Cormac to capture that journey through beautiful photography, and coming and going to Inis Oirr and meeting artists. There is so much going on here. I am constantly in contact with other artists by coming to the island,” she says.

“What interests me in the island is the ancient landscape. I am working with things like seaweed, the sound of the sea, the tides and sacred sites such as An Relig, Teampall Chaomháin, Cill Ghobnait and Caisleán Uí Bhriain. So far, it has been really amazing. I have been working with colour and fabric, to sort of let the landscape show what moves it. The soundscape of the place and the rhythm of the summer.”

Bernadette says November is an important time of year, as it’s the time when people reconnect with their ancestors.

She is taking over the Halla Mhór at Coláiste Ghobnait at lunchtimes next week (Monday, Tuesday, and Thursday from 1 to 2pm and on Wednesday from 1.30 to 2pm) to meet the people of Inis Oirr, to learn from them and to discuss her work on the island.

“I have all these questions. I don’t have the answers. I have a lot of curiosity. I am looking on the island as a studio and the people of the island as teachers,” she says.

“Next week I am inviting people to drop in at lunchtime. I am hoping that the islanders will come in. I would love to tell them about my work with movement. It’s not about learning steps. It’s about dance as a form of expression. It’s about finding dance expression through very ordinary things, through sitting, standing, walking, and lying down. Pausing and moving, and then coming into a theme.”

She will discuss themes such as connecting with ancestors, healing trauma, the power of the wind, and learning to let go, which have arisen for her during her regular visits to Inis Oirr over the past year.

She has learned, for example, that islanders need to be flexible – you have to learn the value of acceptance when ferries and airplanes are cancelled in the winter months.

Bernadette wants to show islanders the movements she has developed on Inis Oirr over the past year, but also to get some feedback from the islanders themselves as she outlines to them her belief on the power of dance in terms of the body-mind relationship and wellbeing.

If you are on Inis Oirr, pop in to see her at lunchtime next week!

To find out more about her residency, you can contact Bernadette at 085 1260931 or check out her website at https://bernadettedivilly.com/ 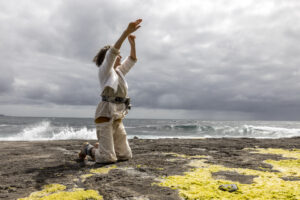 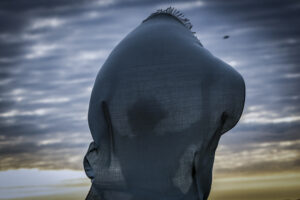 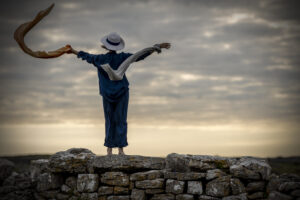