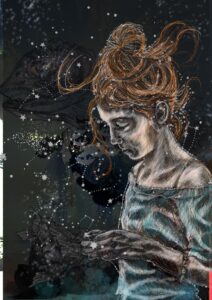 A story which began on the Aran Islands in March of last year and made its way to Turkey via more than 400 people and 50 languages is the subject of a fascinating exhibition which opens at Áras Éanna next Tuesday.

The story which began with a young storyteller Liam O Falthearta on Inis Mór was passed on via a giant game of Chinese Whispers as part of a project called ‘Carrying the Songs’.

Artist Alannah Robins recorded each version of the story as it made its way from Inis Mór to Istanbul, moving between languages and across 29 countries across Europe during the pandemic lockdown.

A visual-artistic process made the same journey as the story.

A drawing was started also in March 2020 by artist Seán O Flaithearta of Inis Mór and was passed via email.

Every small change made to the drawing contributes to a gradually evolving stop-motion animated film.  Limited edition prints of the drawing at key stages of its evolution have been printed.

Áras Éanna is delighted to welcome the ‘Carrying the Songs’ exhibition to our art gallery from August 10 to 23 and September 8 to 30. The exhibition is closed on Mondays.

Artists from Scotland, France, Germany, and The Netherlands are also featured in the exhibition.

Thanks to Creative Ireland, the Galway County Arts Office, Ealaín na Gaeltachta, the Arts Council of Ireland, and the Federation of European Storytellers for supporting ‘Carrying the Songs’. 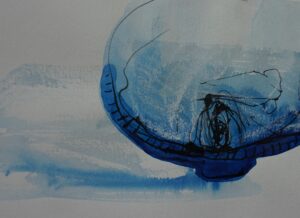