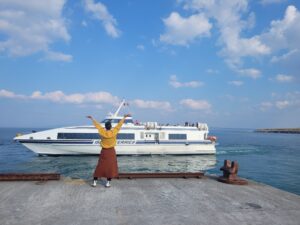 A collective of Galway-based artists known as An Criú are planning to stage a major community event on Inis Oirr next year after seven of them completed a wonderful ten day stay on the island in partnership with Áras Éanna this week.

An Criú, former performers and production people with Macnas in Galway City, have been regular visitors to the island since their formation in 2017. They staged an outdoor exhibition, ‘Amach’s Amach’, at An Gleann Draíochta last summer.

But they felt a need to engage more with the people of the island and artists Emma O’Grady, Orlagh De Bhaldraithe, Midie Corcoran, Jojo Hynes, Tommy Casby, Niamh Moloughney, and Mary Doyle vowed to return before the peak tourist season this year.

“For the last four years, we have come out to the island to put up our work. But every one of us felt a lack of connection with the community. We felt we were parachuting in to show our work and leaving again. We are all community artists and we wanted to build a deeper connection with the people here on the island,” explains Emma.

“So we decided last summer that we would come back out here as a smaller group. There were 25 of us out here last summer. We deliberately chose a time of year that was not too busy, to get a better connection with the people of the place, and start planning for a community art project or event in the future. We decided to come before people get too busy this summer season.” Any project they come up with as a result of their ten day stay will be inspired by the people they met during their stay on the island.

Aware of the deep connection the people of Inis Oirr have with the Irish language, they undertook activities ‘as Gaeilge’ whenever possible – including a communal dinner every evening where artists were encouraged to speak their native language.

“The language was a huge part of it for us,” says Emma. “We made a rule that we would have dinner ‘as Gaeilge’ in the house every night, no matter what level of Irish people had. Some of the activities we undertook on the island, including yoga and a guided walking tour, were fully ‘as Gaeilge’ too.”

Cathleen Ní Chonghaile, from Cleas Crafts, brought them on a guided walking tour which gave the visiting artists a great appreciation for the heritage and landscape of Inis Oirr. People can book Cathleen’s fascinating walking tours at www.cleascraftsinisoirr.com. They took part in a variety events on the island, including a Rosary at Tobar Eanna and a coffee morning for Cancer Care West at Coláiste Ghobnait, the island’s secondary school.

All seven took part in knitting and wicker workshops provided by islanders.

Aine Celine Seoighe at www.seafitnessaran.com put them through their paces with a couple of yoga classes ‘as Gaeilge’.

They composed a “foclóir Gaeilge” of arts terms which can be of benefit to future visiting artists to the island and shared their skills with each other in the studios at Áras Éanna.

The artists were really enthused by the passion which people like Áine Celine, Cathleen, Pól Breathnach, and Micheál O hAlmhain have for the language, heritage, and music of the smallest of the Aran Islands.

They hosted workshops with the pupils of Coláiste Ghobnait and the island’s primary school and were keen to hear the ideas the children and teenagers had for community arts events in the future on Inis Oirr. 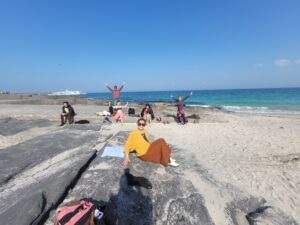 “The ten day trip was essentially about finding ways for Áras Éanna to link in with the community of the island. Our aim is to bring art out into the community. Any community event we stage has to be inspired by the people and heritage of the island and the knowledge that people like Cathleen, Pól, and Micheál have collected over the years,” says Emma.

“The artists who were here this time will be back with a larger group in the summer. We will hold this space and build on it. We want to build on our relationships with the schools. This is a community arts project. We don’t want to come in and throw our art upon them. The project we come up with has to come from the people of the island.”

If anyone living on Inis Oirr has ideas for a major community arts event in Inis Oirr in 2023 or 2024, you can email Emma at emma.ogrady@gmail.com 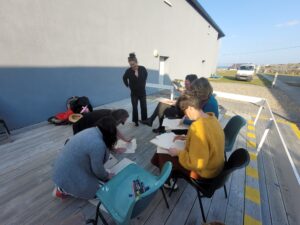