Two Gaeltacht artists, Clare Cashman and Caitríona Ní Conaola, are set to make Inis Oirr their home for the next six weeks thanks to a wonderful new residency in partnership with Ealaín na Gaeltachta.

The artists, who are both based in Connemara, successfully applied for the residencies at Áras Éanna when we advertised them in November of last year.

The residencies were open to any two artists, based in the Gaeltacht, who wanted to take six weeks out on our beautiful island.

They will stay in our artists’ house on Inis Oirr and will be able to use our studios and theatre at the most westerly arts centre in all of Europe until March 12.

Originally from Cork, Clare is a visual artist who has been exploring the landscape, imagination, and perception of Connemara since moving to the Carna area a decade ago.

Her love of landscapes means that she is thrilled by the prospect of spending six weeks living and working on the smallest of the Aran Islands.

Her work has been shown in both solo shows and several group exhibitions nationwide at venues including the Crawford Municipal Art Gallery, Cork, the Butler Gallery, Kilkenny, the Model in Sligo, the Ashford Gallery, Royal Hibernian Academy, Dublin, and Pallas Projects, Dublin.

Caitríona is a native Irish speaker and an interdisciplinary artist from Connemara, who grew up immersed in the ‘sean nós’ singing tradition.

She says she didn’t know there was any kind of singing other than ‘sean nós’ until she saw Madonnna performing on MTV!

She trained with Siamsa Tire in the 1990s, dealing with folk tales through singing, music, and dance, and was an associate artist with them again last year.

She wrote and starred in a one person drama, ‘Glutened’, at the Galway Theatre Festival in 2018 and staged it at the Solofest Festival in San Francisco the following year.

Caitriona wants to use the next six weeks on Inis Oirr to work on comedy, recitation material, and newly composed songs.

Áras Éanna wishes Clare and Caitríona all the best for their six week stays with us on Inis Oirr and we would like to thank Ealaín na Gaeltachta for giving them the opportunity to enjoy the best that the island has to offer. 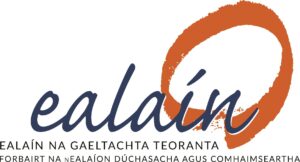